Ben Lomand Connect About Us Our Company Our History

It was in Warren County, in the year 1950, that inadequate and poor telephone service sparked a citizen’s crusade that eventually led to the organization of the Ben Lomand Rural Telephone Cooperative. At this time, Warren County was serviced by the Southern Continental Telephone Company. The System consisted of a common battery system that served the town of Viola. The few rural lines that existed were farmer-owned switcher lines and a few 10-party magneto lines. The City of McMinnville lines were mostly a mass of multiple cross arms cluttered with rusty wire. While operators were on duty 24 hours a day, they were permitted to sleep on a couch during certain hours of the night and depended on a night alarm to awaken them.

A Young Businessman’s Club first took up the crusade to demand modern quality telephone service. Shortly afterward, Warren County organized a Chamber of Commerce with Jim Boyd as President, and Porter Henegar as Executive Secretary. The Chamber made the improvement of telephone service its primary project. Rural Community Improvement Clubs joined the efforts and established special committees. Practically all the McMinnville Civic Clubs appointed special telephone improvement committees. Numerous meetings and hearings were held with the Southern Continental Telephone Company and Public Service Commission. As a result of the firm and untiring efforts of the Public Service Commission, particularly Commissioner John Hammer, a “10 point” improvement program was established.

It was then that the suggestion was made by an official of the Southern Continental Telephone Company that the rural areas organize themselves and apply to the Rural Electrification Administration for a telephone loan so that the people could serve themselves by means of a Cooperative. The Warren County Chamber of Commerce corresponded with the REA and continued to carry the rural development until an REA field representative visited the area and assisted in establishing and incorporating the Ben Lomand Rural Telephone Cooperative. The Cooperative was incorporated on October 2, 1952.

The Hillsboro area is yet another story. This area was served by a home owned telephone company. It consisted of a magneto exchange that was on its last leg. Part of the system was made up of discarded field wire; the other was a rust-eaten iron wire that had been in service for 30 to 40 years. Poles were in even worse shape. The remark was made that “it was obvious that the wire was holding the poles up, but what held the wire up”. Many of the lines were supported by trees and bush growth in fence rows. After a storm, it would take days or weeks to restore service. Each time a severe storm occurred, the worst lines would be abandoned completely. 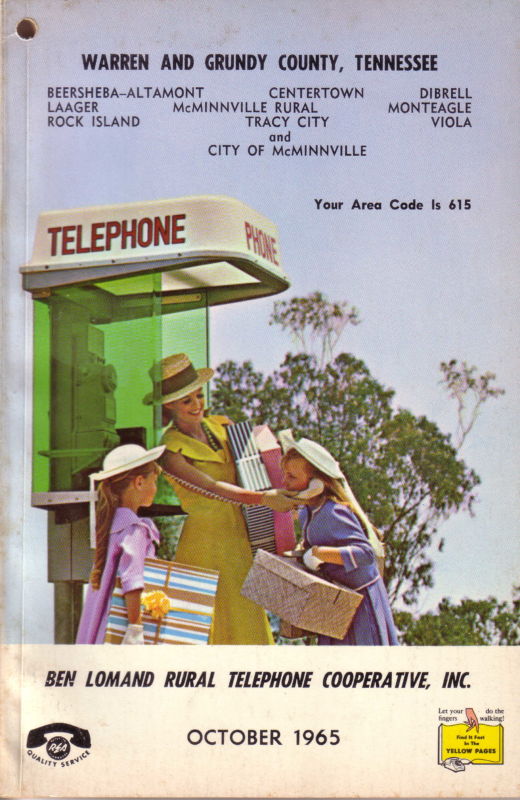 It was sometime after World War II that the people of the Hillsboro area approached the Southern Bell Telephone and Telegraph Company, and offered to give it the Hillsboro Telephone Company if it would take over the area and modernize service. The offer was turned down. Later as Ben Lomand Rural Telephone Cooperative developed, the Hillsboro people turned to it as a means of receiving dial telephone service.

The Beech Grove system was very similar to that at Hillsboro.

At Monteagle, a dial switchboard actually existed and some aerial cable was used in the outside plant. However, the switchboard was a three-digit dial board that could not be converted to accommodate expansion or developing technology. A large part of the outside plant was army surplus, army field wire, or rusted iron wire.

The Tracy City system was a combination magneto and common battery system. Both the switching system and outside plant were deteriorated beyond the stage of recovery. The system served only the immediate Tracy City areas plus a few circuits to Palmer. There was no service to the Beersheba-Altamont areas.

The Monteagle, Tracy City, and Beech Grove systems were owned by the Dixie Telephone Company. This company changed hands several times immediately after World War II. Each started out with high ambitions to improve service but soon bogged down from lack of financing or other circumstances. As Ben Lomand Rural Telephone Cooperative started its development, many citizens of Grundy County met with the organizers of the Cooperative and requested that efforts be made to purchase the Dixie Telephone Company. An option for the purchase was secured which eventually led to the Ben Lomand Rural Telephone Cooperative serving all of Grundy County.

Situations similar to those in Warren County existed in White, Putnam, and Van Buren counties. The City of Sparta was served by Southern Continental Telephone Company with a few 10-party rural lines. Doyle had a remote-controlled magneto switchboard similar to Viola. Van Buren County had only three circuits that had been extended from the remote-controlled board in Doyle. The rural areas of these counties joined together in an effort to form the Falling Water Telephone Cooperative. In White County, negotiations were made with the Southern Continental Telephone Company for the purchase of the telephone properties other than the City of Sparta and immediate area. In Putnam County, however, the negotiations reached a stalemate. The Southern Continental Telephone Company would not agree to release the town of Algood or other concentrated areas along Highway 70N. The remainder of Putnam County was left so broken up it wasn’t feasible to serve the rural areas. Due to the stalemate in Putnam County, the Falling Water Telephone Cooperative was dissolved and the rural residents of White and Van Buren County requested to unite with the Ben Lomand Rural Telephone Cooperative.

From our challenging beginnings Ben Lomand Connect has evolved into one of the most progressive broadband providers in the country.